Inauguration of a new Digital Access Node in Ngwane (Dwesa) 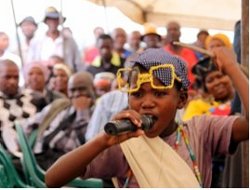 On the 5th of February, several hundred community members of the Mbashe Region (near Dwesa Nature Reserve), staff and students from Rhodes and Fort Hare Universities as well as representatives from industry and government took part in the launch of the Digital Access Node (DAN) at Ngwane Junior Secondary School in the former homeland of Transkei, in the Eastern Cape. The DAN is a point-of-presence of the Siyakhula Living Lab, active in the Mbashe region. The day included speeches given by members of academia, the provincial and district education departments and members of the community. The day also featured song and dance performances by local school children.

The Siyakhula Living Lab project was initiated by the Telkom Centres of Excellence at the University of Fort Hare and Rhodes University in 2005. The Centres partner with small and large industries in the telecommunication sector and the government, through the Department of Trade and Industry. COFISA facilitated the adoption of the living lab methodology, which makes explicit and formalizes the role of the community as solutions co-creator, something that has been there from the very start of the project. Important features of the Siyakhula Living Lab, besides the close consultation and engagement with members of the community, are the wide range of disciplines involved, as well as the close cooperation between two universities that were separated for a long time during the Apartheid years. From the University of Fort Hare and Rhodes University, departments involved include Computer Science, Education, Anthropology, Information Systems, Communication and African Languages, with more to come.

The launch of the DAN at Ngwane is a significant step towards the realization of the larger project goal of exploring how technology can help deliver better services, such as health, education and e-commerce services, to South Africa's rural population.

This project demonstrates the benefits of working closely with the community to achieve relevant, significant results. 2010 marks five years of close engagement with members of the community in the Mbashe region, with benefits already being realized and many more to come.