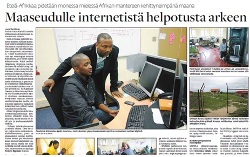 Two South African universities have developed the Siyakhula Living Lab project that has brought computers and internet access to poor rural areas. In the undertaking it’s being studied if internet access in rural communities will help to create new sources of livelihood and better the standard of living – and so far the results have been positive.

The village schools in Eastern Cape’s Dwesa and Nkwalini have gained through the project computer labs and internet access. Internet access is acquired in the area through satellite connection because of the school’s difficult location on the coast of the Indian Ocean.

In the beginning IT-students from the universities educated communities how to look for educational and work related opportunities online. “I’d like to further educate myself and improve my career. I’ve found a lot of information about different kinds of educational opportunities that I had no idea of. Previously I had to travel far away to a big city to gain the knowledge but now I can browse the internet in my own Village” – says the primary school teacher Noluro Mgedezi joyously.

Not only the teachers and the students benefit from the Living lab project. The school’s internet center is open for the whole village. Older people are interested in the new technology as much as the younger generation. The only electricity in the whole village is found at the schools where people will also recharge their cell phones and socialize.

“Some find the use of a computer mouse challenging. The word has spread though and many come here curious to try the use of a computer and browse the internet” – says the teacher Teressa Mqikela smiling. The central goal in the project has been to encourage villagers into voluntary self-improvement. The general unemployment percentage in South Africa is estimated to be around 25% but in reality the unemployment rate in some of the poor villages might even close to 80%.

“With the right attitude and ingenuity the villagers can benefit from the use of Internet financially” - believes the Living Lab-development team. “We help villagers to think how they could benefit from the nearby Dwesa natural reserve that attracts a lot of tourists in the area. On the internet the villagers can advertise their handicrafts as well as their musical and dance performances to the tourists that are coming to the area. Everything depends on the villagers themselves on how much they want to use the internet to their aid.” – says the Living Lab project worker Mitchell Kavhai.

Finland supports the undertaking financially through South Africa-Finland knowledge partnership on ICT (SAFIPA). In SAFIPA’s science and technology projects the goal is to lessen the social and financial inequality among citizens. Inequality in South Africa spurs already from geographical reasons because long distances make it difficult for the poor people in rural areas to access governmental and health services. In small villages such services are usually absent. Distance to the closest city can be hundreds of kilometers and most can afford traveling only a few times per year because in many families up to 8 people may be living on one person’s pension.

The sister project of the Living Labs undertaking, Reed House Systems is developing an ICT-service that will bring e-governance and health services online for people in rural communities. The programmer working on the project, Lindikaya Ntshinga explains in what an unequal situation the people in South Africa are living in: “Getting a birth certificate for a child born in a poor family takes usually a long time. A child born in a private hospital in Capetown gets the birth certificate right away when a mother leaving a rural hospital doesn’t get one. What happens next is that the mother has to travel the city repeatedly to ask for a birth certificate. If it’s not ready, the mother has to come back to ask for it again. A lot of money is spent on travelling back and forward.” Reed House Systems has developed an online service that helps to enquire for a birth certificate. Parents can fill in a form online and though that get information when the birth certificate is ready. “The service will be fully functional in the March of next year. We are developing more services all the time. We want with this project on our part to lessen the division that separates the underprivileged in the modern society.” – says Ntshinga.

SAFIPA’s main adviser Kristiina Lähde believes that the project will interest the commercial sector in the future. Its operation will keep helping the underprivileged in the future but when the funds from different financiers seize the project needs to be self-sufficient financially. SAFIPA’s funding began in 2009 and will end next year. “Siyakhula Living lab is a prime example on how development work should be done long-span. Winning the trust of the community is essential and takes time. In here Living Labs-undertakings usually lack a commercial partner and Reed House Systems will help to fill that gap. In the long run it will help to improve the rural villages in the whole of South Africa.” – believes Kristiina Lähde..

FACTS:
- Reed House Systems and Siyakhula Living Lab-projects are part of two South African universities’ collaboration on science and ICT that are used to develop the South African innovation system, province’s information society strategy and communication technology applications especially in the rural areas.
- The development of the undertaking began in 2002. Information technology students in the universities and other partner are responsible for its implementation.
- The goal of the project is to integrate people living in remote rural areas in South Africa better into the modern information society and thus better the standard of living.
- Finnish development funds are used to support the project with approximately 400.000 euros (2009-2011). The project is being supported through SAFIPA.