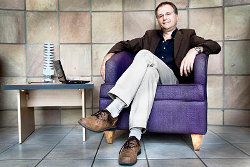 (article by Zamuxolo Matiwana and extracted from Rhodes website)

Last week Professor Alfredo Terzoli presented his Inaugural Lecture, entitled ICT4D: the What, the Why and the How. His research focuses on connecting marginalised communities through proactive and innovative ICT solutions and the Siyakhula Living Lab, established at Dwesa on the Eastern Cape Coast, is a prime example of this goal.

What is ICT4D? The acronym stands for Information and Communication Technology For Development. In the opening to his lecture, Prof Terzoli pointed out that the term ICT4D can be seen as a tautology, as most of the development taking place today is accomplished through ICT. He cited medical imaging, space exploration, weapons technology, and traffic tolling systems as examples. However, the 'development' in this case refers to the developing world, and the improvements ICT can bring to the lives of the dispossessed and indigent. It can be seen as a simile for transformation.

He briefly discussed the danger of seeing technology as a 'magic bullet' to solve intractable problems, but stressed that the ICT community has matured over the past years and now sees ICT as an integral part of the mix out of which the solution must be found. A multi-disciplinary approach, with community engagement, is essential.

Why do people want to embark on the ICT4D field? With the aid of vivid images, Prof Terzoli illustrated the problematic situation in which our urban/rural fringes find themselves, with rapid urbanisation and the proliferation of shanty towns. Through ICT4D, he

believes, the number of people with ideas and aspirations can be multiplied, and employment created for them. Skills can be transferred. In other words, the gap between the haves and the have-nots can begin to be closed.

How does it work? ICT4D is a fairly recent movement, says Prof Terzoli, it can be described as experimental. In the past, the modus operandi was to look at a situation, formulate a hypothesis and run experiments. This was fairly slapdash, and ICT4D people were looking to develop a better method.

At Rhodes University this goal has been realised in the form of something reasonably unique; a system with infrastructure to support the experiments. This has been taking shape for over ten years now, and Prof Terzoli hopes and believes that it is a system worth replicating elsewhere.

The initial step was taken in 1997, when the Telkom Centre of Excellence in Distributed Multimedia was established at Rhodes University. Four months later the Centre was extended to the University of Fort Hare (UFH) and, in 2001, the UFH Graduation Ceremonies were streamed live over the internet. November 2002 saw the foundation of an independent Centre of Excellence at UFH.

This initial strong alliance between Rhodes and UFH, both with Centres of Excellence, resulted in financial muscle and technological credentials, what Prof Terzoli refers to as “street cred”. What was needed was a field test site, and the small community of Dwesa, situated on the Wild Coast and site of one of the country's first successful land claims, was selected. In keeping with the plan of establishing a multi-disciplinary approach, a social scientist accompanied the project.

A telecommunications network was set up, with point of presence labs, open to the community, situated in local schools. Each point of presence has internet access. The field test site is named the Siyakhula Living Lab. For the benefit of the audience, Prof Terzoli defined a living lab as: “A place in which to develop concepts, services and products in a systemic way, co-opting the users as co-creators.”

In 2009 the Siyakhula Living Lab Management Unit brought in Reed House Systems (a software house) to solve the problem of the quality of the prototypes being developed.
The European Network of Living Labs (EnoLL),the international federation of benchmarked Living Labs in Europe and worldwide, has this to say about the project: “It is easy to see why the research being conducted by Rhodes University and the University of Fort Hare in the Siyakhula Living Lab is of great importance to the country and Africa as a whole. It has produced tangible beneficial effects for the impoverished communities of the Mbashe district of the Eastern Cape in South Africa, as well as arousing international interest in the project.”

Prof Terzoli himself describes the Lab as an eco-system, focused on a community-oriented, integrated eServices solution. He speaks of his hope for a future where marginalised and disadvantaged communities are re-connected through practical, co-created ICT software applications, and he anticipates lots of small-scale experiments, similar to the Dwesa Siyakhula Living Lab, joining up together through ICT.

With Prof Terzoli’s research interests lying in the social justice arena, he was the recipient of a THRIP award in 2003 and a Research Collaboration award in 2009.